I have two cats eating the food meant for the hedgehog, how do I stop them?  I like the idea of the cats visiting now and then as I hope they will keep mice and rats away, but I also want the hedgehog to come and eat the food.

More internet searching and I found out about Hedgehog feeding stations!!

I could spend a lot of money on buying one or I could make one myself.  I settled on this one. I happen to have several plastic boxes in the garage and armed with the tools, I managed to make one in less than 30minutes.

So once again a waiting game, the birds, cats - there are two, a black and white one and a tabby one and a mouse appeared over the next couple of weeks, but no sign of the hedgehog. Maybe he has gone to pastures new or wasn't that hungry for the food I was leaving out.
Until the night of the 13-14th May!!
The tabby cat arrived to eat the food, 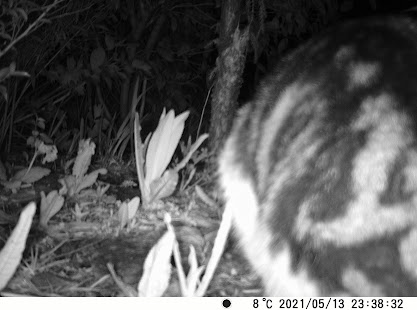 then four hours later the hedgehog appeared but the food was gone.
Now, what to do???
I have found that I cannot upload films from the camera that are bigger than 100mb - even though they are only 20seconds long - so have been looking at how to get them on here and finally found I could put them on YouTube and then I can load them on here.
at Friday, June 25, 2021 1 comment:
Email ThisBlogThis!Share to TwitterShare to FacebookShare to Pinterest
Labels: Hedgehog

Who's eating the food

Over the next few weeks, I continued to put food (I had got some Sainsbury's tinned dog food) and water out for the hedgehog. Each night was different, sometimes it was all gone, others a little and sometimes it wasn't touched, and I did not see the hedgehog at all.

So I began to wonder if the hedgehog was still visiting or was it the birds or worst still, a rat!!!

How can I find out who was visiting the garden?  My niece and her husband had recently invested in and installed a doorbell camera and security camera, I had a look at them but didn't think that was right for the hedgehog.  So I googled 'hedgehog camera'. After days of research and talking to my niece, she asked if I would like one for my birthday, but that was still months away and they said it could be an early birthday present!!

So on the 1st of May, I became the owner of a Victure HC520 Wildlife Trail Camera.  If you are interested in finding out more about it, try reading here. Thank goodness my niece was here to set it up.

The following morning I excitedly looked to see if the food was gone, and yes most of it had been eaten, now to see who had eaten it.

Then a couple of hours later.