The hedgehogs - I am now convinced there was more than one visiting - came every night from the night of the 21-22 June until the night of the 12-13 July BUT I have not seen any since then.

So what happened to stop them visiting.

Well, now that the tennis and football have finished I have time to do some work in the garden. One area in particular had been annoying me as all that was growing there was creeping buttercup. I wanted to clear it and plant some flowering plants.  It didn't take me long (sorry no before photo), and I will have to go back to check for runners, the soil isn't that good either so some kind of improver will need to be added.

This is the after, as you can see its not a very big bit, but can  you see the gaps at the bottom of the fence? 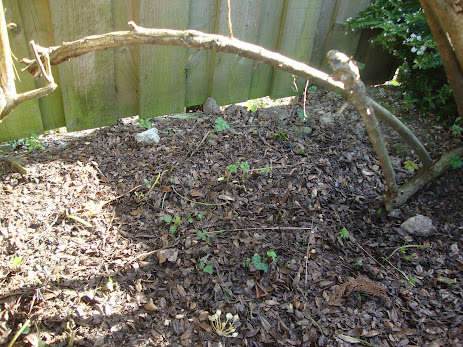 That is were the problem lies.

I had noticed these gaps and wondered what was making them.  I could clearly see something was coming into the garden - my fear was rats - but as I now know it was hedgehogs. I had read that hogs like to live in unkempt parts of the garden and the advice is that we should leave some areas untidy. I have stopped clearing under the shrubs so thought I was doing my bit. I also know these hogs are fussy, (see last post).

This film is one of the last ones I have.  In all the other films the hogs have gone around the brick.

And this was the last photo of one, it is on the left hand side of the photo. 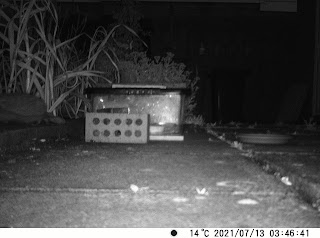 So now after a week or more of not seeing one  - there have been birds and the cats - I think the hogs are upset as their entrance is too open now. I have continued to put food and water in the feeding station, so hopefully they will return one day.

I really do feel so sad and stupid for clearing that area, I should have known better.

Email ThisBlogThis!Share to TwitterShare to FacebookShare to Pinterest
Labels: Hedgehog