The Midnight Library is the third book by Matt Haig I have read.  Well, acually it is the first I have read, (eBook) I listened to The Last Family in England and The Dead Fathers Club on eAudiobook.

The Last Family in England is told by Prince, a labrador who has to protect his human family, and in one part a retelling of parts of Henry IV Part One. This was a choice from an online bookclub I joined during Lockdown.  I had heard of  Matt Haig and read some reviews on his work, so was looking forward to listening to the book. You know how it is going to end from the begining, but it is even worse than I was expecting. Unfortunatley, I did not enjoy it and I think if I was reading it I wouldn't have finished it, far to depressing. 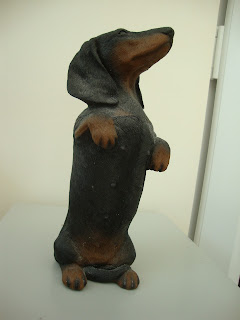 I looked for something that I could link to this book from the collection of objects I have and I come up with this, a Sandicast sculpture of a dachshund. We gave this to my mother as a Christmas present.
She use to tell us a story about her sister's mother-in-law who had a dachshund and it use to hide under a table and whenever a man - including her husband and sons - came indoors the dachshund would rush out and nip their ankles. It only did it to men never women. My uncle use to repeat the story too.
Well anyway mum use to like the little dog as it was very playful and friendly with her and always wanted one herself.  So we got her one for her birthday in 1996.  And this is Glimmer of Hope, that was his pedigree name, to us he was Henry Hope. 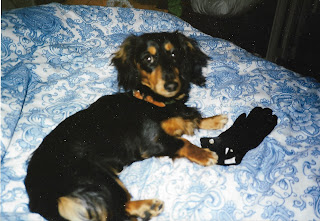 I don't have a dog anymore, if I ever do I would like another one just like Henry, but I do have the sculpture, it was one of the first things I unpacked and put on display with photos of the dogs we have had over the years
I thought I would give Matt Haig another go and The Dead Father's Club was available from the Borrowbox library. It is told by 11 year old Philip who wants to avenge his fathers death by murdering his uncle, who intends marrying Philips mother. Sound familiar? Yes it's a retelling of Hamlet. Another really sad book and as there is some repetitiveness of text/speech, I got really annoyed when listening to it.  Maybe if I had read it, I would have skimmed over those bits and it wouldn't have been so bad.

After reporting back to the Bookclub, a couple of them recommended The Midnight Library as a much better read.  I must say I agree.  Maybe it was because I did read the book (as an eBook) rather than listen to it, as I had the other two. This one is about Nora, who thinks she has nothing to live for and decides she wants to die.  In between life and death she ends up in The Midnight Library.  She has lots of regrets about her life and the opportunity arises that she can see what her life could have been like if she had made other decisions.

I loved the idea of the book and as it was set in a library, it was very much up my street!! It is sad in places, but even if we could change our lives would they turn out any better than the one we have?
at Thursday, August 05, 2021