In April National Rail, had an offer of half-price train tickets, the idea behind that was to get people back travelling by train.  I booked several trips this month to go to Newcastle, £2.90 return, the car park at the station cost £3!!

I also booked a trip to Edinburgh for a day trip to go to some galleries or museums and do some geocaching. That ticket cost £7.40 and only £1.50 at the car park at the station. Cheaper than going by car on my own. 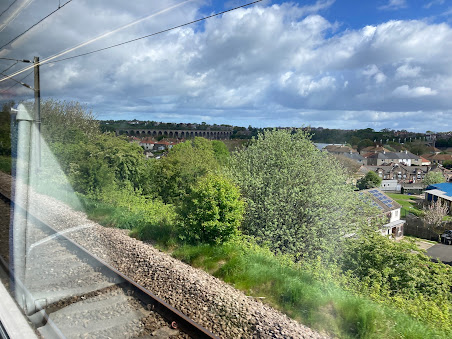 The Berwick Upon Tweed viaduct from the train sorry about the reflection.  The Royal Border Bridge was built between 1847 and 1850, to designs by Robert Stevenson, (the son of George).  There are 28 arches, I only got 24 in my photo.
The weather was not so good here, so took a big coat with me, once I got to Edinburgh the sun was shining, but a bit windy, as I think it usually is on Princes Street. Thank goodness I had a rucksack so was able to put my coat in there for the day.
My first stop was at the City Art Centre, which is at the back of the train station. Unfortunately, they were in the middle of changing their main exhibition so they only had one open, Incoming: New Acquisitions at the City Art Centre. 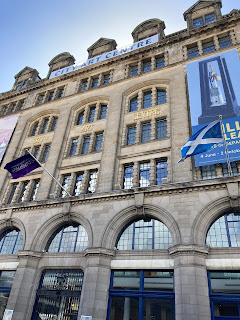 There are a few images of the artwork on the link above, but I did notice a painted called 'Suffolk Meadow.' I took a photo of it and also the label beside it, but then I saw there were 'no photograph' signs so I do not think I should put it up here, I have looked online and cannot see it anywhere, but think the label will be ok. 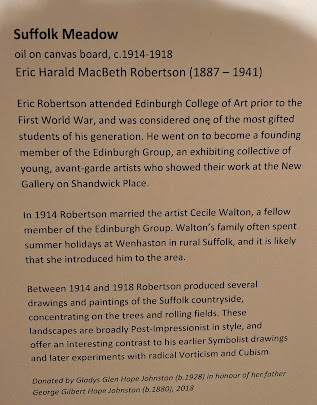 I then moved onto the gardens on Princes Street to do some Adventure Lab Caches and earth caches. I do not think I have explained what they do, but it's a new part of Geocaching, but in this one there are usually five to get to an area and each one has a clue and you have to answer a question when you get to the spot. There are no physical caches, more detail here. For instance, there is one called War Memorials of Princes Street Gardens, and I had to visit five war memorials in the garden and answer a question once I was there.  These were all in the West Gardens.
First, The Royal Scots Monument. 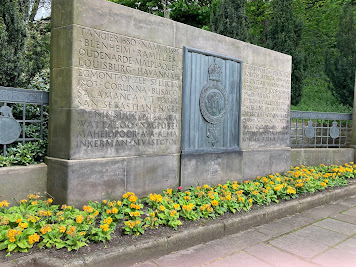 This main stone has listed on it all the battles the Royal Scots were involved in from Tangier in 1680 to Burma in 1943-7. 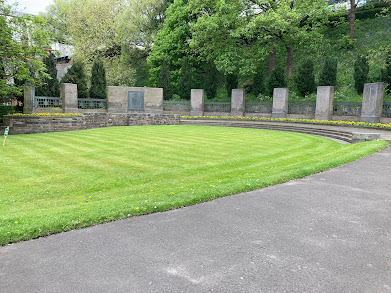 Each of the monoliths has an image of the uniforms of the regiment through the years. 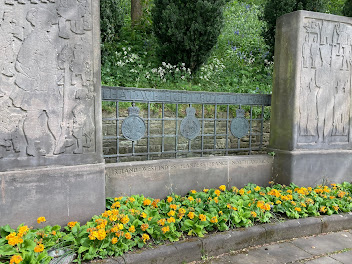 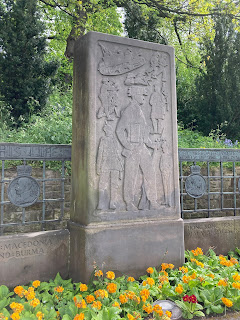 Next, The Royal Scots Greys Monument commemorates those lost in the Boer War. 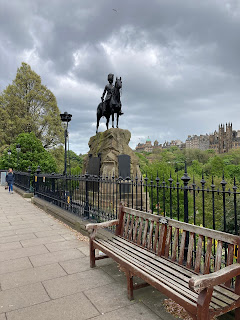 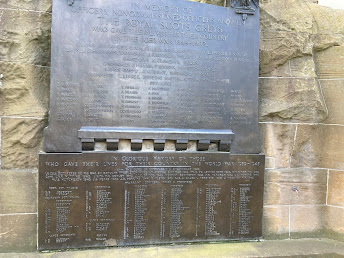 Third, The Call Monument and the Falklands War Memorial Garden. 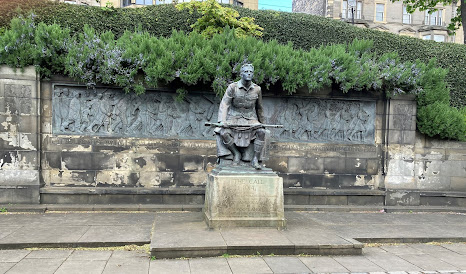 The Scottish American Memorial or The Call 1914 commemorates Scottish troops lost in the First World War. 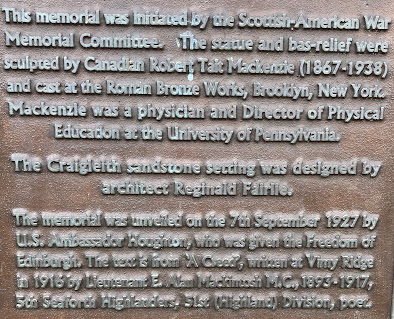 The memorial garden for the Falklands War is opposite The Call. 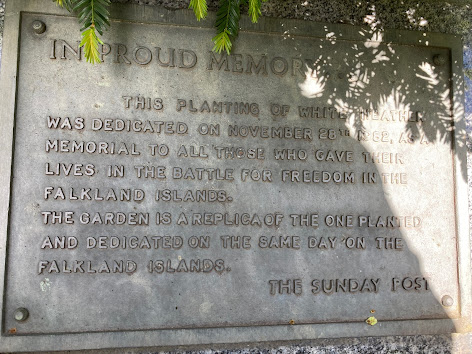 Fourth, was to remember Wojtek a bear who was adopted by Polish Troops during World Two. 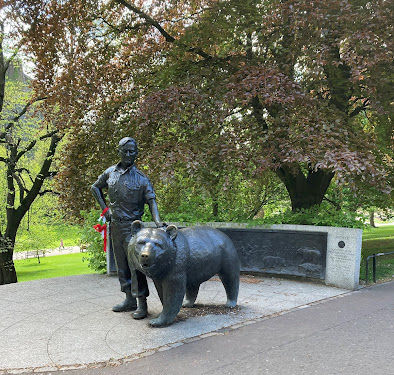 He helped carry ammunition at the Battle of Monte Cassino.  After the war, he came to Scotland and ended his days at Edinburgh Zoo. 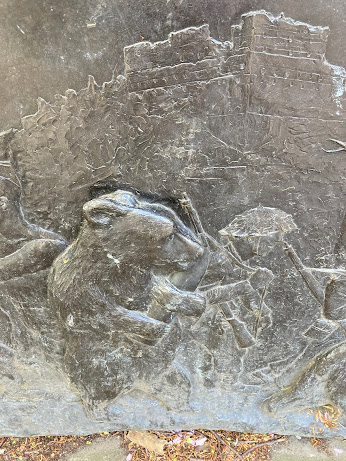 As part of another cache, also set at this monument I had to take a photo of Wojtek and me. 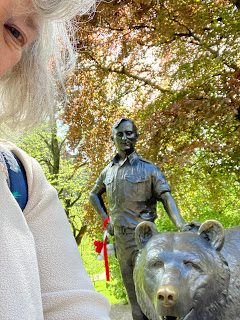 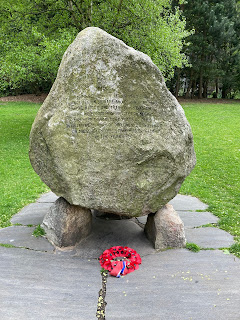 The inscription on it reads:
During the War years 1940-1945
The Norwegian Brigade and other army units
were raised and trained in Scotland
Hee we found hospitality, Friendship
And hope during dark years of Exile
In Grateful Memory of our friends and allies
On these Isles this stone was erected
In the year 1978
And on the back is this:
This boulder was brought here from Norway
Where it was worn and shaped for thousands of years
by forces of nature -frost, running water, rock sand and ice
until it obtained its present shape
The person that set the Adventreu Lab said it would only take about 30mins to find the memorials and answer the questions, but he urged people to stop and remember how each representation is different to the next.  Which I did, I couldn't help but do so. 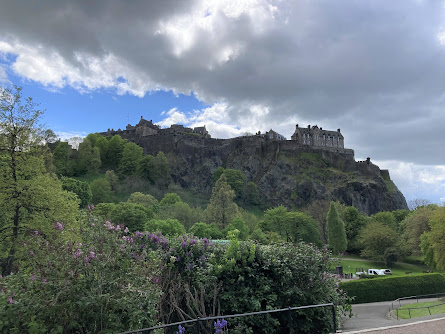 Edinburgh Castle from the Gardens 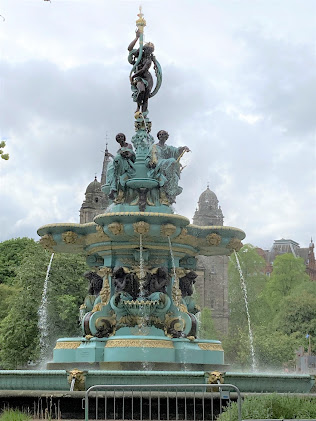 And at the end of the Gardens was this fountain.  I walked all the way around it and could not find anything to tell me about it.  So I had to wait until I was home to do a Google search. 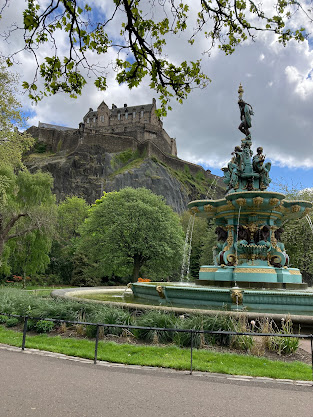 It is the Ross Fountain. It was sculpted by Jean-Baptiste Jules Klagmann from cast iron. A Scottish gun maker, Daniel Ross saw the fountain at the Great Exhibition of 1862.  He bought the fountain for £2000 as a gift to Edinburgh in 1869.  It has recently been restored, it was painted to restore its colour to the original and also to get the water running again.
I am pleased to say I managed to get a total of 16 caches in Edinburgh. More on the rest of my day another time.
at Saturday, May 21, 2022
Email ThisBlogThis!Share to TwitterShare to FacebookShare to Pinterest
Labels: Geocaching, Scotland, Trips