During 2013/2014 the village was given the opportunity to buy the site and make it into an area that would have a positive impact on the village and the outcome is the Blairmore Community Garden. There are two reports on line, one for December 2013 and another from February 2014.  They are pretty similar, but both have lots of lovely photos. It is amazing to read that the village had the opportunity to create this area and for so many people to take part in the process. 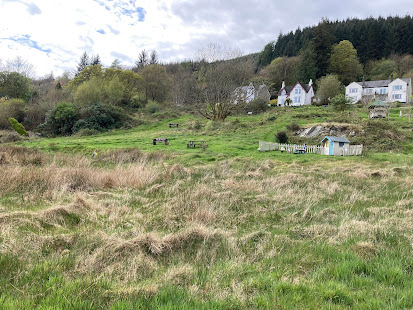 It is a pretty steep area, but there are plenty of seats and benches and things to look at. There are several areas for flowers and wildlife to grow and insects, a butterfly garden etc. There are info boards explaining each area and why they have been created.  There is also lots for children to do. 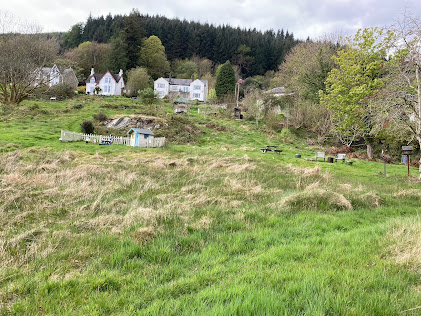 This is the description from the geocaching page for the cache in the garden:

The Blairmore Community Garden is now owned by the community and was a former stop for drovers from the west as well as being visited by picnic parties who disembarked from steamers calling at the nearby pier. The pier itself is privately owned but open to the public, and still attracts visits from the paddle-steamer Waverley during the summer months. The garden is still a good spot to enjoy a picnic and there are views of the Firth of Clyde from the top of the hill. Note the nearby “parliament of owls”

This is where the cache was hidden, a very large bug house: 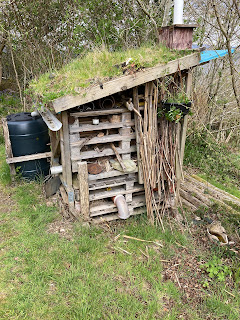 View over the  Loch towards Firth of Clyde, with the village hall on the right.  This was the path I walked up it was very steep and I was glad it was dry as it would have been very slippy if it had been raining. I did find a not so steep path to get back down. 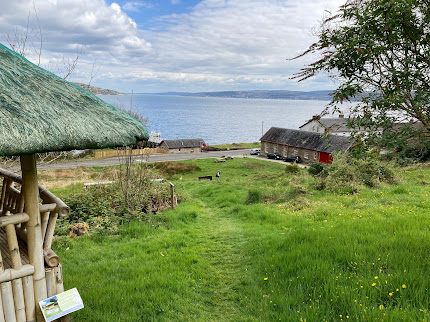 Bluebell Cottage and Snow White and the Seven Dwarfs. The set was gifted to Blairmore to live in the garden.  They are part of a vintage set, made in the 1940s in the USA. Lots of American servicemen and families lived in the area from the 1960's and it is thought that is when they arrived in Scotland. 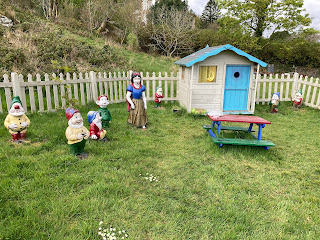 Here are the parliament of owls.  After doing some searching online I think they were made by a local chainsaw carver. They are amazing and worth going to Blairmore just to see them. 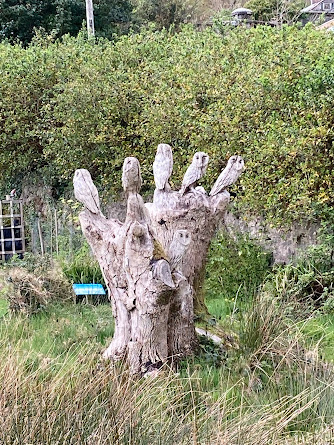 On the way back we stopped off at Eachaig Bridge to get another cache and this is the description from the geocaching site:

Eachaig Bridge, a single-span wrought iron double warren lattice truss bridge was built in 1885 to replace an earlier timber bridge and accommodate heavier traffic. There is an increasing rarity of unaltered wrought iron bridges, of which this is a good example, with interesting details. The bridge also reflects the late 19th century increase in road traffic, as scenic excursions from Dunoon north became more popular. 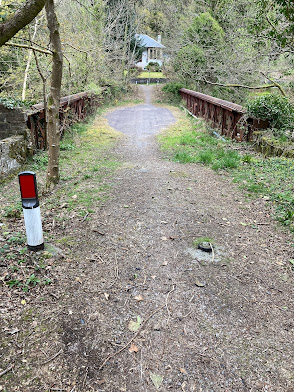 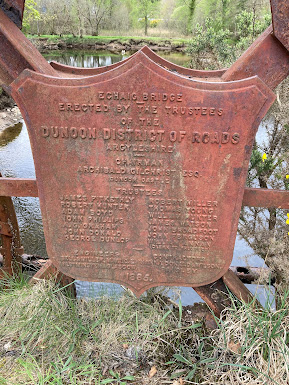 It is only used by pedestrians and maybe cyclists nowadays. 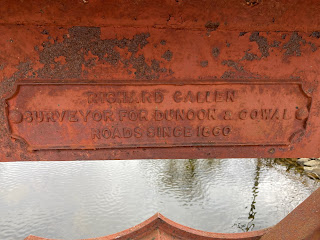 at Wednesday, May 25, 2022
Email ThisBlogThis!Share to TwitterShare to FacebookShare to Pinterest
Labels: Geocaching, Scotland, Trips