A Little Badness by Josephine Cox

A Little Badness by Josephine Cox, is a family saga set in early 20th century Britain.

Young Cathy Blackthorn has never experienced any loving response from her mother; it is her beloved aunt Margaret, with a heart as big and warm as the summer sky, who has been more of a mother than her own could ever be. And when Cathy's father Frank Blackthorn brings home a London street urchin and announces this will be the son he and Rita have never had, Cathy despairs of ever winning her parents' love. Cathy is a generous soul, though, and tries to give the young lad a chance to prove himself, but unlike her best friend, David Leyton, something about him makes her more than uneasy (Goodreads)

I enjoyed this book,  I did guess the outcome long before the end, but that didn't spoil the book for me.  There are some truly awful characters in the story, none of which end up having any redeeming features.  There is tragedy and romance too.  A great writer, who develops her characters and story to make them believable and I wanted to know their outcomes.  The ending was pretty rushed but ok.

I listened to A Little Badness on an audiobook borrowed from Borrowbox from my local library. 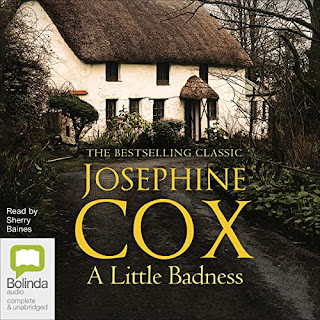 at Wednesday, June 15, 2022
Email ThisBlogThis!Share to TwitterShare to FacebookShare to Pinterest
Labels: Audiobooks