I had booked my week away in Suffolk at the beginning of May and the week before I left I contacted two of my cousins to see if I could visit their mothers, my aunts who are my father's two youngest sisters. I heard from one of them that there was going to be a memorial for the second husband of one of my aunts, who had died at the end of April, the day I was travelling down. I decided to see if I could travel a day early and stay with my friend for the night.

All sorted then I thought about my hair. I haven't had it cut for over a year.  And I thought my aunts may say something about the state of it. 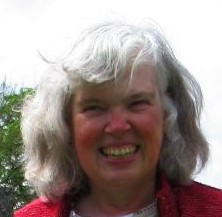 I had arranged to have my car serviced on the Wednesday, the day before I was due to travel, it was supposed to take 4 hours, but was ready in an hour and a half. So decided to go into Morpeth to see if I could find a hairdresser who had an appointment that day.

The second I tried had, but after lunch so I went home for a few hours and then returned. The lady, Mandy that cut my hair was lovely.   My appointment turned out to be the last of her day. Her husband and mother turned up before Mandy had finished my hair too. She did say, (she did prefix this with I don't mean to be rude),  that I did look like I had been dragged through a hedge backwards, (which was true).  She was lovely and chatty and asked how I used to have my hair, it was always short and gave me some advice on how to take care of it now.  Including a new shampoo, Purple Glow/Silver Brightening, which 'brightens grey hair, helps remove brassy tones and softens rebellious strands.'  All of which would help with my hair.

The other thing she did was to straighten my hair, which she said would help too. Also, she told me off for cutting my fringe.😐 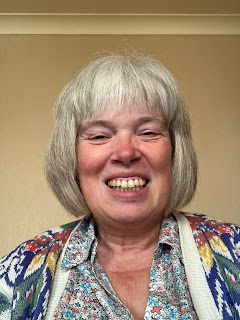 And after
She has cut my hair very well and I do like how she dried and straightened it, (even if I do say so myself 😀). I am not sure I will continue straightening it, but I have borrowed some straighteners from my niece.  I have very thick hair and it can be difficult to cut well, I know I am lucky to have hair as I do, and it does look better short.

I have tried two other hairdressers since moving here and have not liked them, the cut has not been very good.  I'll go back to Mandy in a few weeks.

My aunts didn't say anything, but friends did and even my little great-niece said 'ohhh your hair looks nice.'

at Friday, June 24, 2022
Email ThisBlogThis!Share to TwitterShare to FacebookShare to Pinterest
Labels: Home