Progress report on the raised bed

I last took a film of how the garden is progressing when I got back from Suffolk a couple of weeks ago.  The weather hasn't been that good this week so I have not been able to do much in the garden.  There was a dry spell a couple of hours ago so I went to take another film of the progress.
I really must get a man in, to cut some of the boards for me and make up the other raised beds.  Also, more importantly, I must get some netting for the strawberries.
And this happened just a few minutes later:
I shall have to go out and empty the pots and trays again when it stops.😒
During my last visit to Dunoon, Yamini gave me a desk.  Here are all the bits out of its packaging ready to make up. 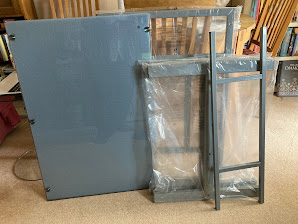 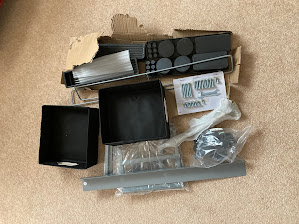 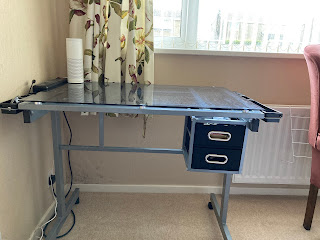 Here it is completed and in position.  I just need to get a chair so I can start doing my neighbourhood watch thing, (or being a nosey neighbour😀).
Now back to the tennis.  Heather Watson has just won and is into the fourth round for the first time in her career. Cameron Norrie is on later and two more Brits in third-round matches tomorrow.  I wonder what the odds are for having four Brits in the second week of Wimbledon!!!
at Friday, July 01, 2022
Email ThisBlogThis!Share to TwitterShare to FacebookShare to Pinterest
Labels: Garden, Home